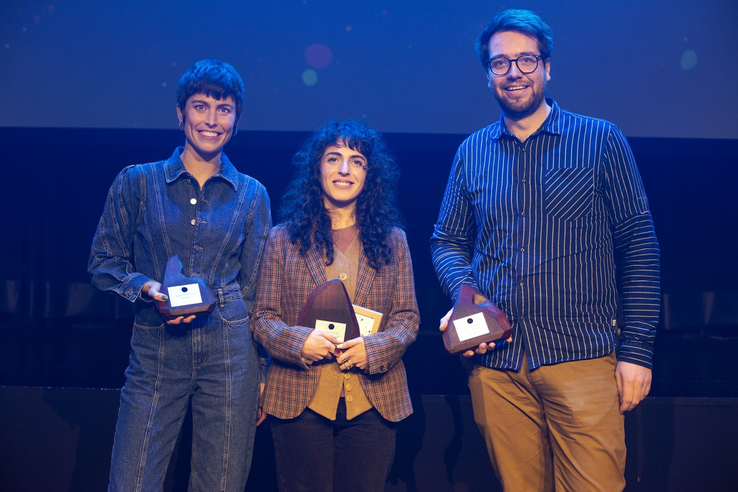 The AHK Graduation Prizes were awarded for the tenth time on 10 February 2022. During a festive award ceremony in the Melkweg, which could be viewed simultaneously via a live stream, the best graduation work of the 2021 class was put in the spotlight. After a fully livestreamed ceremony in 2020, fortunately, the public was allowed to be present at the ceremony again this time. Together with the viewers of the live stream, they could vote for the Audience Award during the show. The prize in the Bachelor category was won by Faydim Ramshe (Directing Documentaries) for her film Yalda: The Longest Night. The prize in the Master category was handed over to Niek Smal (master Landscape Architecture) for his design Water Pride. The audience and viewers of the livestream chose X Y WE by Marleen Hendrickx  as the winner of the Audience Award.

Winning Bachelor’s project Yalda: de langste nacht (Yalda: The Longest Night)
Faydim Ramshe graduated from the Netherlands Film Academy with her documentary Yalda: the longest night. From the jury report: “Yalda: de langste nacht (‘Yalda: the longest night’) is based on a very personal experience, but effortlessly transcends that. It is a poetic film in which animation, graphic images, time-lapse and storytelling merge in a natural way. Faydim Ramshe gives the viewer a new perspective on the emotional side of emigration. The fact that you, as a viewer, also feel lost ultimately is an outstanding achievement.”

Winning Master’s project Watertrots (‘Water Pride’)
Niek Smal graduated from the Academy of Architecture with his design Watertrots (‘Water Pride’). From the jury report: “Fresh water addiction is an enormous and complicated problem, for which Niek Smal has developed a convincing solution in Watertrots. His research is exceptionally well executed and documented, and he presents a stimulating vision. Watertrots is a uniquely relevant and realistic graduation project and at the same time a golden opportunity for North Holland to regain control over water management.”

Criteria and jury
The Graduation Prize of the Amsterdam University of the Arts consists of a cash prize of €3,000 in the bachelor and master categories and an Audience Award worth €1,000. The nominees who did not win the prize in the bachelor or master category each received € 500 for their nomination.
Six bachelor's projects and five master's projects of the 2021 class, from the various academies, were nominated. The jury assessed all entries on three criteria: the quality of the work, the way in which the graduates connected with the outside world and the relevance of their work to the development of the field.

The recordings of the event can be viewed here.