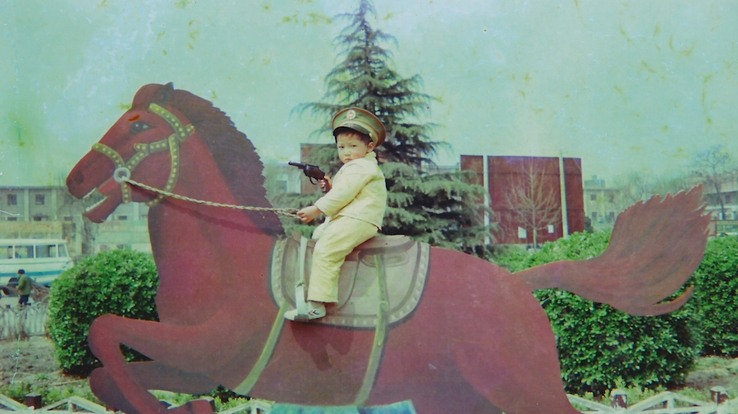 This news was announced by Nederlands Film Festival on September 24th during a live show in Winkel van Sinkel.

Four Journeys by Louis Hothothot is nominated for the Golden Calf Award in the category Best Long Documentary.
Louis Hothothot (Louis Yi Liu) followed the master programme at the Netherlands Film Academy between 2015 and 2017. During this period he worked on his research project Red Kid Black Kid, which he later developed into the documentary Four Journeys.

In his debut film Four Journeys, Louis examines the one-child policy in China and the impact of political decisions on individual lives. He does this through his own personal story. In 1986 Louis was born in China as the second child. His family received a high fine and his father’s career was over. In his twenties Louis moved to Amsterdam. In Four Journeys he returns to China and visits his parents and sister in order to face their traumatic family history on camera.

Before starting the Master of Film at the Film Academy, Louis studied graphic design, animation and video art at the China Central Academy of Fine Art in Beijing and then did the Master of Fine Arts at the Dutch Art Institute. Louis works as a multimedia artist, combining film, video art, performance and graphic design. His work is about memories, emotion, politics and pain and how political power shapes and disciplines our identity.

In Flow of Words by Eliane Esther Bots is nominated for the Golden Calf Award in the category Best Short Documentary.
Eliane Esther Bots finished her BA at the University of the Arts Utrecht and graduated cum laude from the Master of Film programme at the Film Academy in Amsterdam in 2016. She is currently a lecturer in 'Moving Image' at the HKU in Utrecht. Her films, which develop through documentary-based research and encounters with others, have been screened at festivals such as IDFA, Locarno Film Festival, Berlinale, Cinema du Reel, New York Film Festival, Oberhausen, Go Short, Glasgow Short Film Festival, or Kassel Dokfest. Her latest film ‘In Flow of Words’ won several awards, including the Best Director award at the Locarno Film Festival, and was also nominated for the European Film Awards.