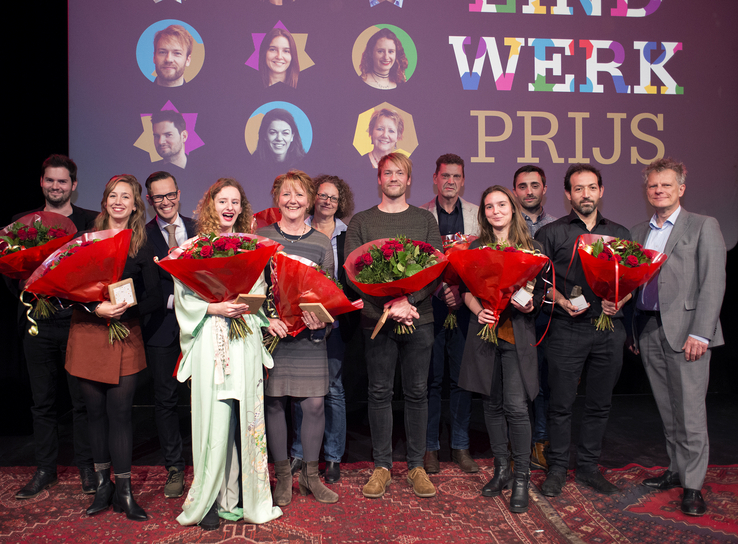 The nominees of the AHK Graduation Prize 2018 together with the jury and president of the board Bert Verveld. Fourth person on the right winner of the bachelor prize and audience award Daphne Lucker, second person to the right winner master prize Bengin Dawod Abdullah. Photography: Erwin van Amstel

On Monday 26 November the AHK Graduation Prize for the best graduation projects in 2018 were awarded. The prize in the Bachelor category has been won this year by Daphne Lucker (bachelor of Fiction) with her graduation film SISTERS. Daphne also won the audience award with her film. The prize in the Master category has been handed over to Bengin Dawod Abdullah (Master in Urbanism) for his project The Soul of the City.

The Graduation Prize of the Amsterdam University of the Arts consists of a sum of € 3,000 in the bachelor and master categories and an audience award. Three bachelor projects and five master projects from the year 2018, from different academies, were nominated. The jury judged all entries on three criteria: the quality of the work, the way in which the graduates have connected to the outside world and the relevance of their work to the development of the discipline.

Winning bachelor project SISTERS
Daphne Lucker graduated from the Netherlands Film Academy with her dance film SISTERS. The film tells an emotional story about three sisters who grow up in neglect. SISTERS is an interdisciplinary research in which dance, film and music merge into one whole, and in which dance forms the visual dialogue between the characters.

From the jury report: 'Daphne Lucker delivers a great achievement achievement by taking a somewhat abstract art form like modern dance as her starting point and use this to completely sweep away the audience. At the same time, she tells a fascinating and emotional story that seizes the viewer by the throat. The beautiful lighting and technical quality contribute to a film that is totally convincing on all fronts – technically, creatively, aesthetically and narratively – while also providing new impetus to the genre of dance film.

SISTERS also won the audience award, with 28% of the 1579 votes. The prize this time was a drone with a built-in camera.

Winning master project The Soul of the City
Bengin Dawod Abdullah graduated this year from the Master of Urbanism at the Academy of Architecture. In his project The Soul of the City, Bengin poses the question of which responsibility he must take to rebuild his homeland of Syria. This led to an investigation into the reconstruction of Aleppo, based on the conviction that the city must be rebuilt in a way that takes the residents into account. Bengin: 'Reconstruction is not a matter of stacking stones, but more is needed for the soul of a city.'

The jury praised the urge for innovation, urgency and complexity that speaks from the work. From the jury report: 'Bengin strikes us with an extremely topical and relevant subject for current and former war zones in an unsentimental way. The fact that he bases this on the strength of the people who have to live there and incorporates all levels of the city – in this case Aleppo – in his design, makes this project ambitious and simultaneously realistic and convincing. A project which you hope becomes a reality.

Presentation
The festive presentation of the AHK Graduation Prize took place on 26 November in the Netherlands Film Academy. The jury consisted this year of chairman Xandra Schutte (editor-in-chief De Groene Amsterdammer), Dominique Vleeshouwers (co-founder & director Combined Creatives and winner of the Graduatioon Prize 2013), Aaltje van Zweden (founder and board member of the Papageno Foundation) and Edwin van Huis (director of Naturalis, also member of the AHK Supervisory Board).