‘De verhalen van de toekomst’ (The stories of the future), read the headline of the Dutch weekly news magazine De Groene Amsterdammer above the article that they published in 2019 about the VRAcademy. They are still working on tomorrow’s stories on a daily basis at the VRAcademy location at the Marineterrein – although this is currently taking place digitally more than on-site.

Since the opening of the VRAcademy in 2017, this is place for all AHK students to become acquainted with the latest Immersive Media (IM) technologies. Students from the Academy of Theatre and Dance, the Reinwardt Academy, Conservatorium van Amsterdam, the Academy of Architecture and the Netherlands Film Academy (NFA) can collaborate there and combine their own disciplines with Immersive Media. Nikki van Sprundel has been working as guest lecturer at the NFA since 2017 and has been involved with the VRAcademy from the start, where she specialised in VR storytelling. In addition, Nikki is curator of the Church of VR at VRDays Europe, a large international event in the field of Extended Reality (XR) and IM.

What goes on at the VRAcademy?
A lot! We give workshops at the different AHK faculties and we also run the VR space. In this space, students from the entire AHK can work on their own project. We offer the space, technology and equipment, technical support and substantive feedback if required. In addition, we conduct research at the VRAcademy. For example, my colleagues are currently exploring how VR can be used to be able to implement an interactive manner of digital teaching instead of the standard video calls and streaming. And certain workshops that I give are also part of long-term research projects, which develop a step further each year through those workshops. We also do separate research projects now and again in collaboration with the professional practice, which are carried out with students during workshops.

How did you end up in the world of XR/IM?
That was a quite a strange path! I first began a training to become a film actor. When I found out that I didn’t want to continue further with that, I started producing and directing videos myself, but just like with the theatre previously, I also didn’t feel totally at home in that medium as a creator. After those few years of working, I decided to start doing a university of applied sciences degree programme (hbo-opleiding): Communications and Multimedia Design. I was already very interested in interactive storytelling at the time, but there wasn’t a degree programme yet which focused on that in the Netherlands, When Virtual Reality was on the rise during my graduation year, I immediately knew: this is what I’ve been searching for! During my graduation year, I subsequently conducted research into Virtual Reality storytelling at the Dutch broadcaster VPRO, through which I gained knowledge that didn’t really exist yet in the Netherlands. Because I wanted to share that knowledge, I started looking if there was room for this in education. That is how I came into contact with the Film Academy.

For the laymen among us: what are the differences between those abbreviations?
In the case of VR, you replace reality for a virtual reality – you put on a headset and the real world disappears, which is replaced by a new one. In the case of Augmented Reality (AR) and Mixed Reality (MR), you make a combination between the reality that you already know and a virtual one: you place virtual objects in your real space. XR is an umbrella term for VR, AR, MR and everything linked to that. XR uses real-time technologies, which means, to put it simply, that real-time rendering takes place. IM is slightly broader than XR. A VFX film falls under that, for example, which is created using real-time technologies (such as the 2020 graduation film Disconnect) or the VRSpace project in which Conservatorium van Amsterdam students Diogo Carriço and Daniel Bolba used the body as a drum computer with the aid of a motion capture suit. For me, IM in education is about how you can use new technologies in the right way, thus triggering something special in your audience in terms of experience. An IM expert works in much smaller teams and is therefore much more involved in the content. In many cases in the field of work, they are also what you would refer to in film as the director. 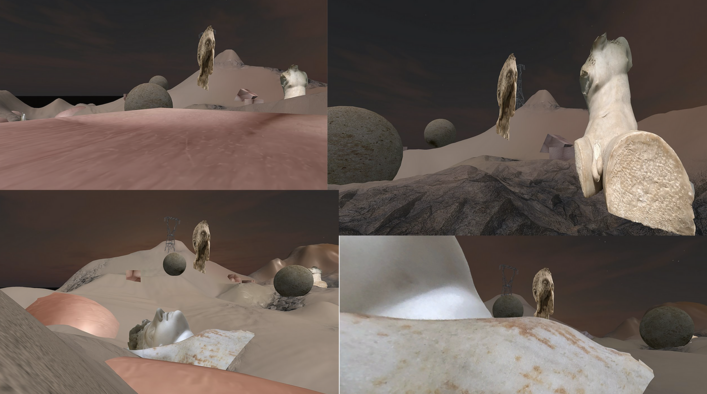 What is a good example of an IM project that was created at the VRAcademy?
The project of Paul Boereboom and Leon Rogissart, who are both busy with their graduation year at the Academy of Theatre and Dance. Paul is a scenographer and created an online world last year named Alterations, in an attempt to make the connections between the human and the non-human visible. Leon is a theatre director and designed his first Virtual Reality experience two years ago named Headspace, in which he saw the opportunity to shape what goes on inside our head. That work came into being during one of my workshops. During their graduation year, they wanted to explore the VR medium even further and they created a new project together in our VRSpace entitled Ascension (which can be seen from 11 to 22 December). This work came about through a quest to find how the heart and the mind interact. Are these two substantial elements, which create and duel in our daily existence, compatible with each other or do they exist independently of each other? With Ascension, they wanted to facilitate the foundations for an encounter between these two physical elements. An invitation for an internal dialogue, by means of VR.

How do you see the future of the IM department?
As a VFX&IM student, you can specialise in IM in the third year and graduate with an IM project in the fourth year.  We hope to attract even more Immersive Media students in the coming years who will opt for that specialisation. In my view, that is often a slightly different type of person than the Visual Effects student. They form the basis from which the VRAcademy can work. When people from other departments set to work with VR, such as theatremakers or musicians, they often do not yet have the technical know-how to do that. We want to be able to link more of those students with someone from the IM department in the future, so the initial lack of technical knowledge is no longer a barrier.