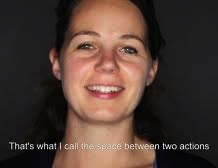 Artist statement: ‘The mild awkwardness of unconscious actions and moments’
My work is all about the space between actions. I observe the subconscious moments in between two presentations: when a speech ends, but the audience has not yet begun to respond; when the shopping has been paid for at the checkout, but the bags have not yet been stowed in the boot of the car. I also like to look at a single moment; a man standing in the street, with a heavy bag and drooping shoulders, and this captures my curiosity as to what has just occurred, and what will happen next.
I prefer to focus on such images, because I consider their beauty, their obliviousness and their vulnerability highly appealing. They reveal a little about what people also are, in a world which has become increasingly media-oriented, and in which actions are increasingly rendered significant purely by virtue of their presentation. People are, after all, not simply a series of carefully prepared and well-considered presentations – much as we might like them to be. The mild awkwardness of unconscious actions and moments attract my attention.

In my endeavour to develop such an observation into a finished work, I commence by zooming in on one particular moment. I peruse it, move around it; sometimes from right up close, sometimes from a distance, until a circle forms round about it in which an idea manifests itself. Such moments are magnified in my art projects, while they remain small in my film projects.
In art projects, I lend significance to a moment by isolating it – which is where the magnification occurs. I often stage situations in order to further develop an idea.
In the case of film, I can keep the moment small within the context of the finished work, because it is a part of a greater whole: namely the storyline, or the script. This framework gives me the scope and the freedom to explore such a moment, then lend it form and significance. Next, I return it to the dimension it originally had when it caught my attention in the street.