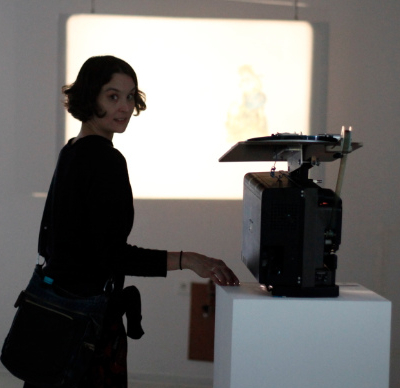 Julia Kaiser (Germany, 1977) studied classical and modern dance in Cologne and Arnhem before she went to the Gerrit Rietveld Academy in Amsterdam, where she graduated in 2004 with three short films. In 2005, she set up production house HARRYFILM.

Read more
- From 17-23 March, Julia Kaiser's graduation film 'Elegy' will be broadcast by Cultura24 and streamed on www.cultura.nl in the context of the Holland Animation Film Festival.
- Our alumni: how are they doing? Julia Kaiser and 'Soft Powers'
- Kloosterkino & Extrapool will be screening 'Elegie' and 'Farewel to Han' in their Heavenly Animated Shorts programmme during Kunstnacht Nijmegen (28 September 2013). There will also be a workshop with Julia Kaiser, Peter Vandrie and Avi Krispin.
- Julia Kaiser has received development funding (filmic experiment) from Nederlands Filmfonds for her project 'Zachte Krachten'
- EYE has added Julia Kaisers 'Elegie' and 'Farewell to Han' to it's collection of Dutch experimental short films
- Jan Pieter Ekker writes about Graduation Show BELOW SEA LEVEL

Artist's statement: Humans and dolls as equals
So far, I have made 16mm films in either live-action or stop-motion animation. In the short live-action films I work with dancers and actors (trained and untrained). They are filmed at existing locations.

In the stop-motion films, I use found objects as protagonists: used, handmade dolls which I buy at flea markets and in thrift stores. They are knitted, crocheted or sewn, or made of clay, wood or Fimo, and filled with cotton, wool, straw, old socks or toilet paper. Because these dolls were not made for animation, they always retain their own material quality when manipulated into motion. This results in a realistic clumsiness which I find very suited for melodrama.

The sets I make for the dolls are a combination of miniature decors and banal everyday objects. For example, in ‘Die Roten Schuhe’ (2004), I use beer glasses as barstools. I also work with combinations of partly animated painted backdrops, double exposures and rear projections.

The subject of my Master’s research is how to combine these two different filmic worlds of live action and stop motion into a hybrid or bastard reality in which humans and dolls exist as equals. In my research, I restrict myself to the possibilities offered by 16mm analogue film techniques.

I want to create the interaction between humans and dolls through montage and in-the-camera effects. I use the conventions of narrative cinema to suggest a continuous logic between the different modes of filmic representation which are discontinuous on the level of physical reality.