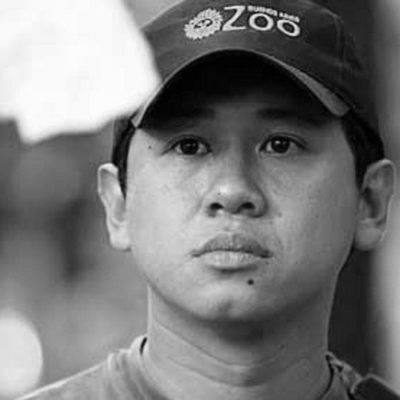 Edwin (Indonesia, 1978) is a filmmaker from Indonesia. His first short film was selected for the Quinzaine des Realisateurs at the Cannes Festival in 2005. His first feature 'Blind Pig Who Wants to Fly' received the FIPRESCI Prize at the IFFR 2009 and his film 'Postcards From The Zoo' was nominated for a Golden Bear at Berlinale 2012.

Read more
- Edwin will be on Berlinale's International Short Film Jury
- Edwin's film 'Someone's Wife in the Boat of Someone's Husband' will be screening at IFFR 2014. The festival will also be showing the footage from his graduation show 'HORTUS' as an 8 minute film.
- Graduation Show: ‘Hortus’, a one night exhibition by Edwin, exploring sensuality and intimacy in cinema
- Interview with Edwin: 'Exploring sensuality and intimacy in cinema'
- IDFA DocLab Live "Playing with Reality": Edwin's interactive documentary project '17,000 Islands'
- Edwin's film 'Postcards From The Zoo' will be screening at Berlinale in February 2012