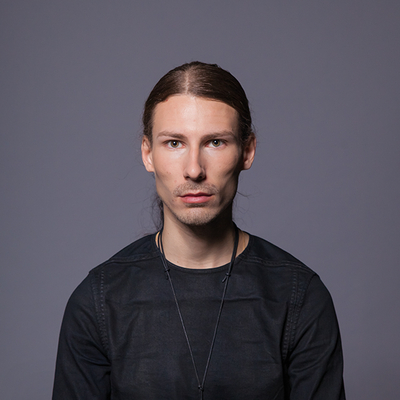 Keskiivari graduated from Tampere University of Applied Sciences in 2011 (Bachelor of Fine Art) emphasizing on cinematic media art. In his research in Netherlands Film Academy’s Master of Film Program he explores the ideas of scaling, distance and perception as practical artistic tools but also as existential subjects. He is also interested the differences and similarities between cinematic, physical and virtual spaces and the spectator’s position in these structures.

Silent communication, the meaning of a subjective individual in a community and emotional charge in architectural space are recurrent themes in his work.

Keskiivari makes cinematic video works that are often exhibited in form of an installations, but also as short movies at film festivals. He works continuously on hi’s independent audiovisual experiments, but also on short movie based film projects with film crews and artistic collectives.

Read more
Dawood Hilmandi and Mikko Keskiivari have been invited to show their work at Art i Escena 2015 by Ex Abrupto in Moìa, Spain

Mikko Keskiivari's short film 'Dolly the Duck' is screening at the 60Seconds Short Film Festival in Copenhagen until 29 March 2015. The works are shown in public spaces around the city and Mikko's work was selected for both the Jury Award and Audience Award series.

Poetry of Scaling - An Attitude To Artistic Practice

I work with the ideas of scale, distance and perception as practical artistic tools but also as an existential subject for my art. I believe that the act of scaling is a fundamental element of reflective and analytical thinking but also that it can be a much more subconscious, subjective experience that can change our perception on what ever we are looking at. In order to learn from our actions and history, to build our own future, we need the capability of zooming in and out (as an ongoing process) to understand what we are actually dealing with.

For me art is a device of poetic communication which can be used to remind us about the peculiarity in things that we think we know very well and that often something seemingly alien is actually more familiar and similar to us than we originally assumed.