Hadas is on a mission to find different ways to use the unpredictable and the random as a narrative tool. She found that it touches her most inner place as a creator and leads her to tell only authentic stories that are at the core of people and events she encounters. At the same time she turns her other tool, namely: the camera, into a confession, performance and storytelling instigator. By wandering the streets and getting freely attracted to places and people she uses her unconscious in combination with the reclaimed everyday drama as a starting point for films that could gently scratch the essence of humanity.

Although The use of the notion “wandering” may sound somewhat passive, it is actually a very active engagement that she has towards a certain kind of events, characterised by irregularities: something that doesn’t seem not right but at the same time is very recognizable. Thus, she's using the notion ‘cinematic wandering’ (that she would like to think she invented but she has no such delusional thoughts). Using her ‘Camera in a bag’ method, she's going around creating opportunities for irregularities to arise, first by observing or pointing out and then by editing and adding a layer of narration through her voice. It may look like something we have seen before but because she's zooming in, all of a sudden one can see how extraordinary, how weird, how funny, how strange things are. She's looking for (and sometimes finds) narratives in the everyday and the mundane reality, where supposedly there aren't any.

Using her ‘camera in a bag’ method, Hadas has initiated her ‘100 men’ project:  99 older men are being captured in the director's lens on the sunny streets of Givatayim, Israel. Why is she doing this? Because on one of these streets, no less sunny, lives her father. She does not know him and she's not allowed to visit him. Still, she hopes he may be the 100th man. 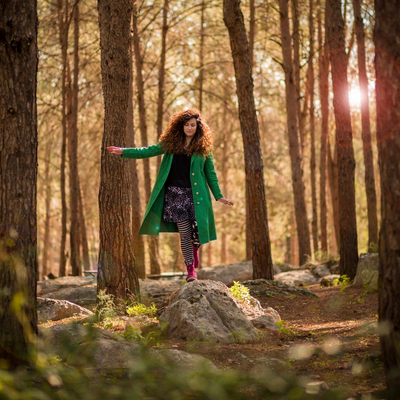 A BA graduate in film. Her award-winning short-films and feature documentary "European Grandma Project" have been screened in global festivals.

For years she has worked as a content editor and manager in the children's world (Virtual Worlds, gaming and TV channels) alongside the adult world, where she wrote, directed, produced and edited as a freelance filmmaker. Currently lives in Amsterdam as part of the WOW residency while working on her first feature film and completing her M.A in film.

Her greatest passion is the junction between movement and film. She uses cinematic choreography as an emotional detector for creating a story and for anthropological, social and visual research of her subjects and the time and place they've been filmed in.