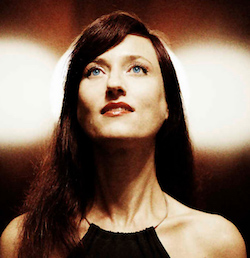 From January 2018, transdisciplinary artist and thinker Vesna Petresin, has joined the Netherlands Film Academy and the Amsterdam University of the Arts as Artist in Residence. As part of the Research Group Film at the Film Academy, Petresin’s residency focuses on new image and media technologies and their creative possibilities, and is connected to the VR Academy initiative of the Film Academy.

The main focus of Petresin’s residency is the development of an artistic research project: ‘Media Opera: a collaborative creative experiment for Mixed Reality’. This project links personal artistic research, collaboration with students through seminars and workshops, and technical challenges in media arts. The project connects disciplines, media, techniques and methods in a collaborative creative and learning experience. Its research focus is on extending methods of concept development, script writing, producing, performing and disseminating narrative in a Mixed Reality context. The creative team for this project also includes students and alumni of the Amsterdam University of the Arts.

Aims of the project
The multidisciplinary format of a ‘media opera’ merges performance art, music, visuals, film and technology. Live arts are valuable to questioning technology-heavy artistic media, where audience engagement is often missing. Mixed Reality immerses audience inside the experience of the media, rather than the media inside the audience.

The project investigates alternatives to the format of projection on a 2D screen to a seated audience. It develops, through a series of experiments, a ‘media opera’ - a gamified experience with various formats of 3D  / 4D spatialisation of content, and degrees of interactivity and immersion.

The series of experimental pieces are inspired by flow and form. The original narrative on flow of body (gesture), sound (audio) and liquid (visuals) is native to media arts whereby the sensory experience (audio, kinetic, visual) is digitally manipulated and enhanced for the audience. The aim is to enhance immersion and promote a first-person interactive experience of an art piece.

At regular moments during the residency, Petresin will present the development of the project. A first ‘open studio event’ took place in the beginning of March at the ID Lab of the Academy for Theatre and Dance of the Amsterdam University of the Arts.

Aside from developing this project, Petresin’s activities as Artist in Residency also include teaching at various master and bachelor programmes of the Amsterdam University of the Arts (film, architecture, theatre, music, dance). She also regularly does performances and gives presentations of her research project at conferences and festivals.

Petresin’s practice explores embodiment, transformation and time, alongside the barriers between the intimate and the public sphere. Using her voice, movement, sound, image and light, she explores the concept of time in relation to body, movement, space and emotions.