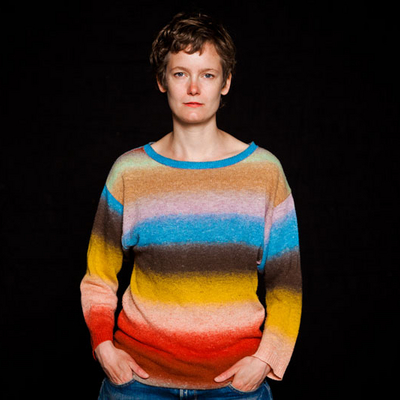 Ellenoor Bakker (the Netherlands, 1980) has a background in location theatre. Since 2007, she makes film with location-based stories at the core of the work. As a director, she has been involved in performances of theatre groups dogtroep (lab08, de montan and betonotbe) and PeerGrouP. With the latter she started to experiment with filmmaking (Koud, Nat and Onland). Her approach towards filmmaking is influenced by her background in location theatre, even if her style has shifted much more towards documentary.

Artist's statement
A fresh spring day in 2015. I am sitting in the window of a small apartment on the Prins Hendrikkade in Amsterdam. A student now lives here, but in 1980 the whole building complex was squatted. They were ‘Luxury Apartments’ and they were empty in a city with huge housing shortage. I sit at the window with a megaphone to re-enact a speech given by squatter Moos in this exact place in 1980. Moos, now 35 years older, is there too and gives me advice: “You should talk more sharply. You have to really force the people outside to listen to you”. My words blare over the Prins Hendrikkade: “M.E, you hear me? We’re giving you our answer in the form of a pre-prepared press statement”. The original speech was addressed to the Dutch riot police, the M.E, ready to clear the squatted buildings. Now it blares across a busy Prins Hendrikkade. Some people stand still to watch what I do. Some are smiling, others shake their heads. A third one yells to me: “Dirty hippie! Life is not free”.

The friction created by simultaneously exploring events happening in the same place but at different times, is a recurring element in my work.

A place is often the vehicle for my stories and I choose places where there’s tension. Change is about to happen and with it come questions: Who is entitled to this place? Who can make the decisions about this place? My work, however, does not seek to give a simple, unilaterial or one-sided answer or to prove the correctness of a particular viewpoint. I want to show the complexity of the situation and invite people to share in ‘the world’ of a particular place, to view the situation from within, with me.

My background is in theatre but for several years I have also been working with film because I wanted to deal differently with the element of time. I use my theatre background to think about film and vice versa. I make documentary theatre and documentary film in which I use elements of play to investigate situations. The physical confrontation with a place, which you experience in location theatre, remains the point from where my work starts.