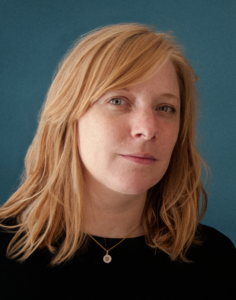 Mirka Duijn (the Netherlands, 1980) is a Dutch-Finnish filmmaker. In 2003, she started her career at public broadcasting station VPRO, experimenting with interactive broadcasting and storytelling on television, the web and radio. Being pioneers at that time the ‘digital’ team won quite a few prices amongst which Mirka won a personal Spin Award.

However: Mirka’s dream was not to explore the medium itself, but the world around her. She decided to focus on writing and directing films. The kick start to her career as a director came in 2009 with her short fiction film Manitoba, which premiered at the IFFR and screened at the Cannes Film Festival. Since then she has been working on a wide range of fiction and documentary films, music videos and experimental projects, combining her strengths in the field of concept development, storytelling and precise cinematography.

’Last Hijack Interactive’, her latest project as an interactive director, won a Prix Europa and a Digital Emmy Award.

Mirka's projects usually start with a fascination for a place, rather than a person, which makes her films more sociological or anthropological than psychological. Her curiosity about the world results in a unique choice of arenas, from deserted beach towns in Kyrgyzstan to brothels in Pattaya. While capturing places and cultures, she explores the boundaries of documentary and fiction film.

Artist's statement
I grew up in a household where Dutch and Finnish cultures intermingled. And like anyone growing up in a multicultural household, I have always been conscious of issues of belonging and identity from a very early age, feeling at home in both suburbian Amstelveen as well as in the forest surrounding my grandmother’s tontti. My parents fuelled my interest even further by taking us with them on their travels. My father often took me with him on his business trips, and while he was working I walked the streets of towns like Venice and Washington, or strolled through the desolate outskirts of Dublin, like a proper flaneuse. At first, being the outsider in such cities felt like moving in a safe zone, commenting on the impressions that occurred in front of me but that I was no part of. Yet, the more cities I saw the more my position as an outsider started to feel uncomfortable. It seemed as if I, being a tourist, could never grasp the real – I just saw the surface, the façade or worse: something constructed as a reply to my presence as a tourist.

Many of my films start with the fascination for ‘place’ and the ways in which people relate to places. How dwellers give meaning to place, and vice versa, how place gives meaning to their identity. But also how outsiders, when visiting foreign places, seem to move through a ‘liminal zone’, a zone which I myself experience as both pleasurably liberating and uncomfortable at the same time.

My latest project, 'Shangri-La, paradise under construction', is a film about the outsiders’ relation to place. I investigate the discrepancy between the tourist’s quest for authentic experiences and the host catering to this quest by marketing a place, using local culture as a commodity.