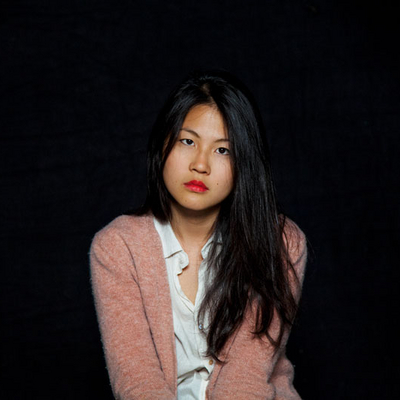 When Namfon Udomlertlak (Thailand, 1987) graduated from Fine Art school in 2010, she started working as an actress and as a graphic designer. After a while, Namfon returned to work in the artistic field. She now works mainly on time-based media.

Artist's statement
It was 5:50 in the morning. I woke up to shoot my parents’ morning routine. I followed the radio sound to the kitchen. My mother was there, cooking, as always. At first, she seemed a little surprised to see her daughter up so early, but when I carried my tripod to place it beside her, she acted like I wasn’t in the kitchen with her. Then I asked her to say something about me. She asked me, to assure herself, “I continue cooking while talking, right?” I said “yes, please do”. I turned off the radio and then she started talking to me, asking me about the food she was cooking and giving comments on my diet. I was silent behind the camera and left her to continue her monologue. Then at some point she stopped. But I asked her to go on, to talk about anything she could think of. The same topics kept flooding out, on-and-on, just like I’d expected. Only it seemed that she had more worries about me than I had thought. At some point, she had no more words to say and walked out of the frame to wash her hands. So then I made a cut.

A few months have passed. I’ve watched her talk to me through the editing program and I was stunned because her words towards me were sentimental. I realized that I would never be the perfect daughter for her.

This is one of the scenes in my film project that allowed me to understand that finding reality through filming is very challenging. It taught me not only to face reality, but also to overcome my fear of confronting reality in everyday life. As I have been developing self-understanding through the creative process, working with time-based media for me is not only a way to help me escape from the real world but, watching time-based media, especially in galleries and museums, I’ve also understood the importance of patience and thus, to be patient with myself.

In order to explore dramaturgy or the creation of drama in daily life, I often use a camera to function as a witness to my investigation into truth. I combine the narrative form, real events of everyday life and filmmaking methodology in an attempt to investigate the core of reality and its ambiguity. I’m investigating what we believe to be real or fake in reality. And, more importantly, I want to use my film work to encourage my audience to learn how to pay attention and to question and revise what they see.

The recent film ‘Free Falling’ results from my personal obsession with a load of questions towards life. The film is used as a tool to investigate the relationship between my family and myself, as well as exploring truth through the filmmaking process.