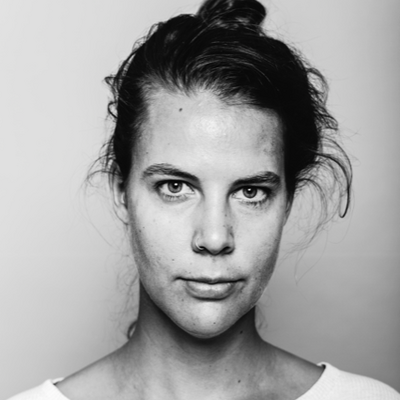 "All people are hypocrites". In this blunt thought Rosanne Pel (the Netherlands, 1987) made a series of four short fiction films during her studies at the Utrecht school of the Arts in audiovisual media. In all these films the characters tried to untie themselves from the inhabited human world.

During the Master of Film she decided to disapprove herself and interpret the meaning and importance of the human as a political being. With the human condition of Hannah Arendt as the foundation of her research, she works on vengeance, punishment and forgiveness, which should later this year result in a film proposal for a black comedy on manipulation and sexual abuse, narrated from the perspective of a perpetrator.

Artist's statement
Not long ago I moved to another apartment in Amsterdam. A house which for many years has not been maintained. Upon entering, a friend of mine noticed a quirky light construction in the kitchen, which clearly had not been put there just temporarily. Dangling from the ceiling, insubstantial, a dusty yellow/orange lamp, clumsily conducted from the kitchen to the living area by a cord. “What were those people thinking?’’, he said.

This question regularly pops up in our friendship. However intriguing, the strange light construction is only the result, and only a detail of human behaviour. My fascination goes a lot further.

In my work I’m attracted to human imperfections and to the concrete and inconsistent actions of people. Sometimes the consequences of such actions are innocent, funny. I’m interested, though, in extreme behaviour and in actions of people that are actually harmful. I want to understand them, I want to catch the origins of those actions in my films.

I try to think and work from people’s shortcomings, their impotence, their incapacities. I do so because I can identify with them, at least partly. But I also do so because I want to believe that the damage caused by people’s actions can also be healed again by human actions.

Often the manifestation of violence seems incomprehensible. It scares me. By understanding where it comes from I can get rid of that fear. What interests me, therefore, as a filmmaker, is not the violence in itself but the circumstances that lead people to inflict harm on others.