A "camera in a bag" Journey of a filmmaker walking down the streets.

Hadas is on a mission to find different ways to use the unpredictable and the random as a narrative tool. She found that it touches her most inner place as a creator and leads her to tell only authentic stories that are at the core of people and events she encounters. At the same time, she turns her other tool, namely: the camera, into a confession, performance and storytelling instigator. By wandering the streets and getting freely attracted to places and people she uses her unconscious in combination with the reclaimed everyday drama as a starting point for films that could gently scratch the essence of humanity.

Walking the streets or hovering around certain locations, she is alerted, but not chasing anything. She is after reality’s irregularities – things that don’t seem right but at the same time feel familiar. She uses the term ‘cinematic wandering’ (that she would like to think she invented but she has no such delusional thoughts). Using her ‘Camera in a bag’ method, she's going around creating opportunities for irregularities to arise, first by observing or pointing out and then by editing and adding a layer of narration through her voice. zooming in and out of things, people and behaviors, all of a sudden one can see how extraordinary, how weird, how funny, how strange things are. She's looking for (and sometimes finds) narratives in the everyday and the mundane reality, where supposedly there aren't any.

Using her ‘camera in a bag’ method, Hadas has initiated her ‘100 men’ project: A feature length documentary which serves as a poetic quest to reconnect with a father figure.

99 older men are being captured in the 36-year-old director's lens on the streets. Why is she doing this? Because on one of these streets, lives her father, who she's not allowed to visit. Still, she hopes he may be the 100th man.

Her first film in which she explored this method is 'Two people will come with balloons': While her mother is undergoing surgery, the director documents the act of waiting. When the time stretches as it does in a hospital, every passer-by, every gesture takes on a meaning. Desperately and whimsically she examines whether she could control reality through the act of filming, but soon reality shatters her efforts and leaves the terrible waiting time in her hands, as it is – infinite. 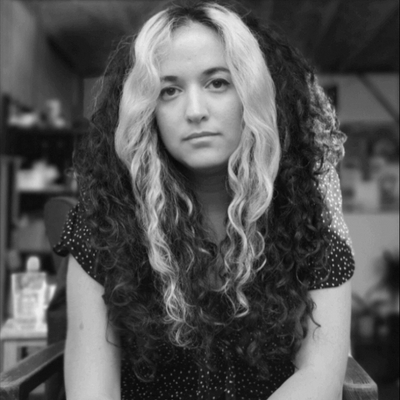 Hadas Neuman (Israel/Netherlands) is a BA graduate with an Honors scholarship majoring in script-writing and directing at Sapir College. In a more informal setting, she can also be introduced as a filmmaker walking down the streets (with a camera in her bag). Her short films (Prove it, Goosebumps, Fairy on a roof, and more) and feature documentary (The European grandma project, 2018), have been screened at global festivals, some of them won awards. Currently, her artistic practice is shifting towards the point at which fiction and documentary intersect.  She is welcoming that very moment with a mix of excitement and anticipation (even suspense), visually expressed by the blank space below:

Hadas’ latest experimental short documentary, Two people will come, with balloons, has won the Next! Award (WIP) at the DocAviv International Film Festival 2021. In her research, ‘The production of the unpredictable’, she explores different ways in which she can use unpredictability as a narrative tool to reclaim the spectacle of everyday life and incorporate it into hybrid works that blend documentary and autofiction (where autobiographical elements meet fictional storytelling).