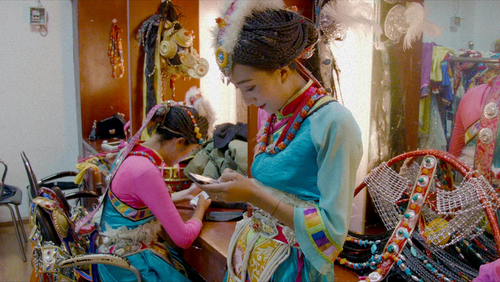 On 2 July the Amsterdam Film Academy’s Master of Film brings together four filmmakers, Jyoti Mistry, Emilio Reyes-Bassail, Mirka Duijn and Eyal Sivan to discuss their understanding of research in and through cinema practices. How can these practices act as an inspirational dialogue partner or a counterweight to other research fields?

The participating filmmakers will show excerpts of their work, guide us through the different phases of their explorations and share their expertise. The event will conclude with a discussion about research in and through cinema practices. The title of the event, Imagine Research, refers to the playful and nonconformist way in which the four filmmakers perform research, and how they critically rethink methods and re-imagine research practices. It also relates to the fact that they conduct their research through cinema, which is the standard-bearer of imagination.

It is in the specificity of the medium, the audiovisual, that we find the relevance of this practice-based research to other fields. While the world is becoming increasingly mediated, most fields of research have embraced audiovisual tools neither in their research process nor in their means of dissemination. Instead, most research practices are still dominated by text-based methods and formats of dissemination, thus missing out on opportunities to activate thinking through other senses.

Imagine Research is produced by the AHK lectorate of film at the Netherlands Film Academy in Amsterdam.

Please RSVP via the form below.

Jyoti Mistry
Jyoti Mistry is an internationally recognised filmmaker, researcher and professor, who works with film both as a research form and as a mode of artistic practice. Her current research explores cross cultural experiences anchored in filmic tropes that are responses to socio-politically and geo-economically framed questions of identity. Currently Jyoti Mistry is Professor in Film at Valand Academy, University of Gothenburg in Sweden.

Eyal Sivan
Eyal Sivan is a filmmaker, writer and researcher, originally from Israel he is living in Paris (FR) and Amsterdam (NL). Known for his controversial films, Sivan has produced and directed more than a dozen political documentaries. His work touches on themes as the representation of political crime, the political use of memory, the ethics of documentary filmmaking and the Israeli-Palestinian conflict. He is currently a professor at the Master of Film at the Netherlands Film Academy.

Emilio Reyes-Bassail
Emilio Reyes-Bassail is a filmmaker, sound artist and professor based in Mexico City. In his current work he tries to reflect on the way memory and narrative operate within the construction of the self. His films are developed in a serendipitous manner, often working through extended time spans where everyday life informs the projects, mirroring the mechanics of journal writing. He teaches Ancient Media History, is a fellow of the Young Creators Program at FONCA and currently develops the artistic research course at the Universidad Iberoamericana in Mexico City.

Mirka Duijn
Mirka Duijn is a filmmaker working on documentary, interactive, experimental and fiction projects. She is currently working on Shangri-La, Paradise under Construction, a feature-length documentary on the political and cultural impact of tourism on Tibetan China, which is part of her PhD research.

Before the Imagine Research event it is possible to visit the exhibition Shifting Perspective with installations by the eight graduating researchers. You can find the exhibition at the ATD Studios Exhibition Space, address Overhoeksplein 2.