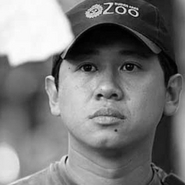 Edwin is a filmmaker from Indonesia. His first feature ‘Blind Pig Who Wants to Fly’ received the FIPRESCI Prize at the International Film Festival Rotterdam 2009, and his short film ‘Kara, Anak Sebatang Pohon’ was the first Indonesian film to be shown in the Director’s Fortnight in Cannes 2005. His latest film, 'Postcards From The Zoo' was nominated for a Golden Bear at Berlinale 2012.