From Thursday 8 to Sunday 11 September 2011, the Graduation Show for the first seven students of the Master of Film programme at the Netherlands Film and Television Academy will take place at cinema Het Ketelhuis and the adjacent MC Theatre at the Westergasfabriek in Amsterdam.

The show will consist of a screening programme, an exhibition and a live programme. The aim of the screening programme and exhibition is to present the (provisional) results of experiments and research in film making and visual arts, in the form of short films, moving photographs and installations. In different ways, the works respond to the erosion of clear distinctions between film genres and art forms. Framing the works, the live daily programme will consist of guest speakers from the film and art world and presentations by the graduates.

Bogomir Doringer will present his transdisciplinary research on a phenomenon that is known as the Balkan Syndrome, a condition allegedly caused by depleted uranium used for example in NATO weapons during the 1999 bombings in Kosovo. Transformation is a pivotal aspect in Doringer’s work, in which he combines documentary, installation and online media.
Interview  How to direct transformation

Bart Juttmann is interested in creating the conditions for a story, the series of operations in the collaborative filmmaking process that generate the tale. His research focuses on the material of the narration, in which scriptwriting is key. Juttmann will present his new short film The Final Word (2011).
Interview  Screenwriting: a study

Reinier Noordzij’s work is dedicated to investigating social communication and the desire for contact. His short film and documentary are characterized by the specific nature of unpredictable dialogic relations, and a constant blend of the theatrical with the cinematic.
Interview  Between the visible and the invisible

Lisette Olsthoorn explores the roles of director, actor and spectator in the filmmaking process. She will invite actors to perform gestures and movements rather than act, resulting in a very personal way of filmmaking in which the director is also a witness.

Taatske Pieterson’s approach is all about presence. She attempts to find ways to document the presence of people in everyday situations. This requires the camera to function not merely as a recording device, but also and at the same time as a stage and an audience.

Kay Schuttel works in photography and film. She investigates the manner in which popular media affects how young girls present themselves physically and verbally. The result is a series of upsetting accounts of girlhood sexuality and teenage behaviour.

Kasper Verkaik investigates the boundaries of and crossovers between fiction and documentary in order to define personal notions of realism and authenticity. Verkaik will present his research and his experiments, thus allowing the audience insight into his working process.

The Master of Film/Netherlands Film and Television Academy thanks: 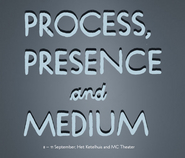