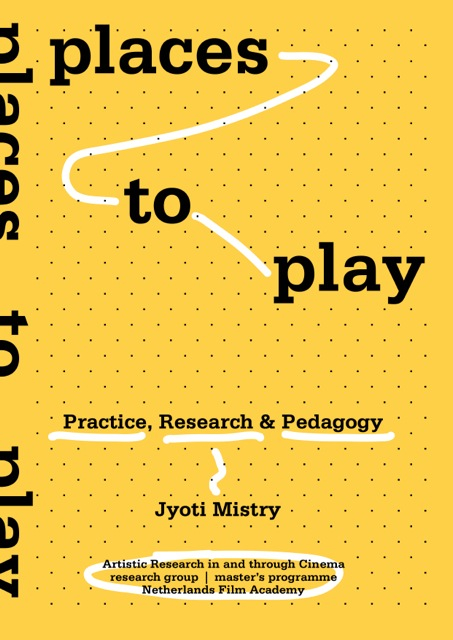 The Artists in Residence programme of the Amsterdam University of the Arts (AHK) has published Places to Play – Practice, Research & Pedagogy. The English-language publication in the series ON AIR was written by the South African filmmaker, visual artist and film theorist Jyoti Mistry.

The Artists in Residence programme of the Amsterdam University of the Arts (AHK) has published Places to Play – Practice, Research & Pedagogy. The English-language publication in the series ON AIR was written by the South African filmmaker, visual artist and film theorist Jyoti Mistry.

In 2016 and 2017, Jyoti Mistry was Artist in Residence at the Netherlands Film Academy’s Master of Artistic Research in and through Cinema, at the invitation of professor and head of the Master’s programme Mieke Bernink. The publication Places to Play is the account of this period. Mistry reflects herein on her work as a teacher, her research and her advisory rule with respect to the function of PhDs in the arts. Mistry: ‘While I have made films that have been exhibited in a variety of contexts, I have spent a larger part of my career teaching film practice, film history and film theory, and this residency offered me the opportunity to explore a number of ideas relating to artistic research and creative practice.’ In the publication Places to Play, she deals with this trinity in greater depth by specifying the relationship that they enter into with each other.

The publication begins with a discussion between Mistry and Bernink in which the function and significance of artistic research in relation to the Bachelor’s and Master’s programmes in the film industry is extensively discussed and examined. Both observe that artistic research is an attitude rather than a method. Mistry: ‘Like you said, artistic research is an attitude and I think one has to embrace it as embodied in the ethos one sets in the classroom, an ethos in which pedagogy is part of the practice and practice continuously informs ways of producing knowledge.’

Mistry also talks about her own research methods and how she applies these to the Master’s education. She also made use of the EYE Filmmuseum’s archive from the colonial period and placed the historical images in a critical context. The students were also challenged to question the ethnographic material and to reinterpret the images on the basis of their own research questions. The results were combined in a joint exhibition entitled Archive as Place to Play in the EYE Filmmuseum at the end of 2016.

Interested in the publication of Jyoti Mistry? undefinedThis can be read online. Or send an email to air@ahk.nl for a free print copy.

AIR?
An Artist in Residence inspires students and teachers at the Amsterdam University of the Arts by confronting them with current developments and issues in the art practice. Innovation and connection are the main focus of these tailor-made AIR programmes, as well as the international and multidisciplinary context. Results of the AIR programme will be published in the series ON AIR.