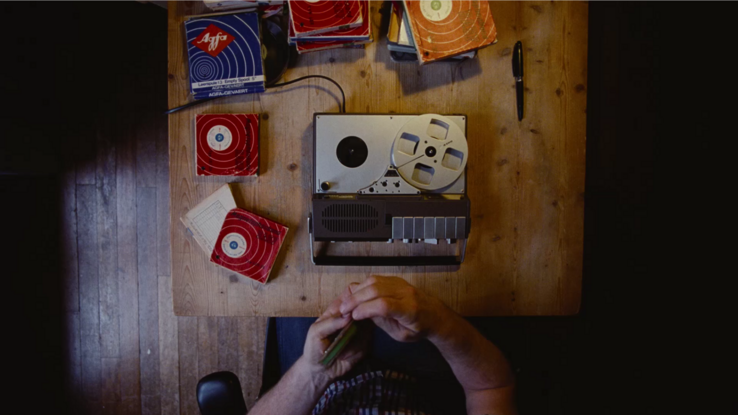 Halfway through the previous century sound equipment was introduced that made it possible to send spoken instead of written language. Because of the huge emigration from the Netherlands to Australia and Canada, this innovation immediately proved to be an immense success. Now the family abroad could be informed about what was happening in their homeland and vice versa: new music, a radio-report of a soccer classic and above all elaborate accounts of domestic ups and downs like a new-born, a death, a wedding, all sorts of ailments, the weather of course and the family-recipe for gran’s stew…

By far the most recordings consist of breaches and broad jumps or refer to things that are supposed to be common knowledge but are pointless now. Listening to (mostly) intimate content, not meant for an outside public, makes you feel like an eavesdropping peeping Tom. Why would you ever want to learn about another man’s cough or a rainy holiday? Such a question however is based on a misunderstanding; because it doesn’t matter that most conversations have no documentary- or news value. It is about the spontaneous, fragmentary time-lapse that is being shown. The content often reveals more than what was intended. Unintentionally, a certain quality can be attributed that may not be in accordance with the unknown maker, but that is very much valued by me as a listener. I’m listening to a history that will never be over. It’s the poetry of everyday life.

Wim van der Aar started his career making so called experimental films, but soon turned out to be a much-praised director of prizewinning commercials that stood out by their timing and wit. In 2012 he took a new approach to his filmmaking by making the documentary THE VAN WAVEREN TAPES. This new approach was followed by GABBERS (2013), ALL YOU NEED IS ME (2016) and JAN WOLKERS SPEAKS (2017). He is the proud owner of a collection of found footage consisting of about 5000 image- and/or sound-carriers. Together with other fans, he established SUPERM8 in 1996; a platform for amateur films, home movies and experimental films.