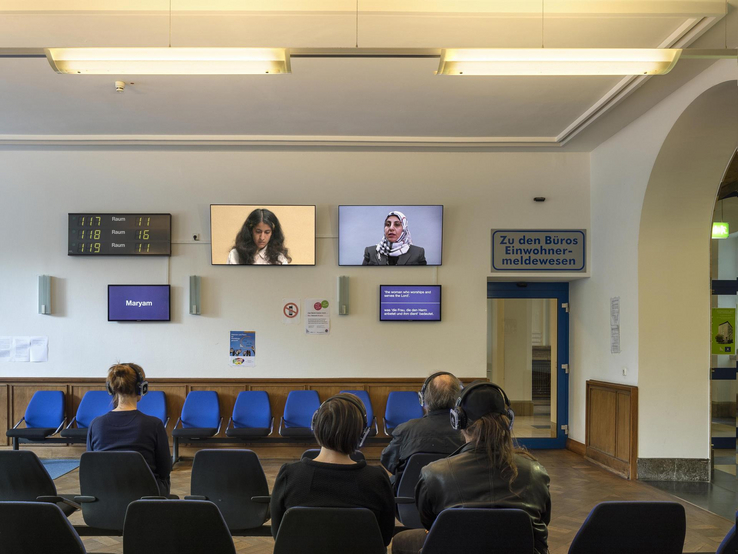 Please note that due to updated measures surrounding the coronavirus spreading in The Netherlands, this Master of Film lecture is cancelled.

Nicoline van Harskamp makes audiovisual, digital and performative works in which embodied language - i.e. spoken word - is the prime element, and English is the medium and the theme. Van Harskamp introduced the term "Englishes" to describe the widespread use and modification of the English language by its non-native speakers. It is also the title of her 2016 video series about the political import of this linguistic development, and the loss of the perceived position of primacy occupied by dominant strains of English. In her subsequent works PDGN (2016) and Some Name Some Noun Simply (2017), she experimented with the sound of a future global link language. The personal name, as the only untranslated word cluster in multilingual situations, is the subject of the performance series My Name is Language (since 2018). By using multiple languages within the same live performance, van Harskamp creates incomprehensible situations for her audience. Incomprehensibility as an ideological and artistic strategy will be the focus of her upcoming book My Name is Language and this talk.

Bio
Nicoline van Harskamp is an Amsterdam-based artist whose live pieces were staged, among other places, at Steirischer Herbst in Graz, Tate Modern in London, KunstWerke in Berlin, Witte de With in Rotterdam, New Museum in New York, Museum in Amsterdam; Arnolfini in Bristol; Serralves Foundation in Porto; and the Kaaitheater in Brussels. Video works were presented in museums, biennials and other institutions around the world. She is a Professor of Performative Art at the University of Fine Arts in Münster, Germany.