The Master Film in Utrecht

The Master Film is well represented this year at the Nederlands Film Festival in Utrecht (25 September - 4 October 2013).

In a lecture titled 'What You Read Is What You Get', script consultant Franz Rodenkirchen will present the results of his study on how scripts are written and reviewed during the Holland Film Meeting.

The way in which film projects are evaluated and financed is still based on a traditional concept of writing screenplays, while filmmakers often feel disconnected from this conventional process. Together with a research group, Rodenkirchen has studied this matter during his residency at the Film Academy's Master Film department this year.

Margot Schaap took a time out from the Master Film programme to make One Night Stand 'Flarden van Thomas'.

Ruben van Leer, who graduated from the Master Film this summer, will be presenting his project 'Symmetry', a dance opera shot in CERN's particle collider at PechaKucha Night Utrecht.

Master Film alumnus Kasper Verkaik's 'Daddy Doll', a documentary that resulted from his research at the Master Film, will be screening in the DOC25-1 programme on:

Sonja Wyss' short film 'Greifensee' (NTR Kort!) is nominated for Best Short Film in the Golden Calf Competition and will screen on: 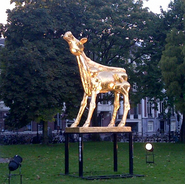