How to direct transformation

Bogomir Doringer (Yugoslavia, 1983) has a background in fashion design and visual art. After studying Sociology in Belgrade and completing a Bachelor's at the Gerrit Rietveld Academy in Amsterdam, he started the Master’s Degree Programme in 2009.

I grew up in Yugoslavia during wartime. It was an intense and inspiring time with lots of uncontrolled, isolated 'freedom', which required maturity at an early age. My exit from the war-isolated zone was film, and the offering was amazing: in one day I could watch Almodovar, Bergman, Lynch, John Carpenter and Dynasty. I was exposed mainly to film; never to modern art. As a result, I related anything that happened around me to cinema. Film and the bloody news were my main influences.

The many questions I asked myself in the nineties have resulted in my current project, which I have been working on for some five years now. During my art studies, mass media fabrications were my main source of inspiration. At the Rietveld Academy, I discovered the link between my art projects and film as a medium; I needed to understand it. The project with the working title Balkan Syndrome and the Master’s degree programme at the NFTA offer me a perfect way to combine and confront my artistic and ethical choices. My art projects seem to be structured as films. I treat every subject as though it will become a film. My films never appear on the silver screen; they emerge in a space.

My project focuses on the disastrous health effects of depleted uranium (DU). DU is a material in the shells of explosives used by NATO in the Balkan wars and on many other battlefields in the Gulf war, Iraq and Afghanistan. Because of its very high density and hardness, it is used in the shells of projectiles, which are built to pierce the thickest and strongest armours: kinetic penetrators. In these explosions, temperatures rise to levels at which all solid matters sublime. When the materials in the gas solidify again, micro- and nano-particles shaped like very small spheres are released into the environment. These particles enter the bodies of people and animals by breathing, eating and drinking.

The Balkan or Gulf war syndrom, as it has been labelled, involves serious and sometimes fatal health problems. Soldiers and civilians who survived the first Gulf War and the conflicts in the Balkan and Iraq suffer from cancers, leukaemia and disorders of the blood; their children are often afflicted with very severe birth defects. According to the prominent researcher Dr Antonietta M. Gatti, the radioactivity of DU, which is reduced to very low levels, does not play a main role in these health problems. Instead, they are caused by the nano-particles that develop as a result of the extremely high temperatures. Hence the term ‘nano-pathology’. The problem does not seem to be limited only to DU. DU is only one of a few powerful catalysts.

For my graduation of the Master’s Degree Programme, I am developing an installation that will involve the use of the following components:
1. Holographic projections of interviews with a group of survivors, a widow and a lawyer about health problems and the physical and mental transformation as a result of these problems. Shadows and light rays will be dispersed in the space until they vanish.

2. By exposing blood, sperm and biopsy samples of contaminated people, I will present actual evidence of the fact that this problem is far from resolved. It might work as a museum, opening its doors before history has been authorised.

3. An interactively and seductively transforming ferro-fluid sculpture will conclude the installation. It will be covered with nano-technological material, used for camouflage as well as for the detection of tumours on an experimental basis. This ferro-fluid will facilitate amazing transformations of a 3D printed body, using magnetic fields and magnetic tricks. The sculpture will be a memorial, devoted to the subject, extending my questions: what is trust, what is real and what’s not, and what do I do? 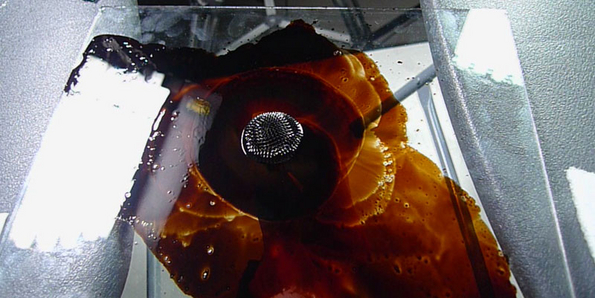 Many media sources always portray these syndromes as the mistakes of that same region in which the war is going on. This way, the problems seem to stay far away. Much of my work is inspired by these problems and similar transformations of facts by the media. But the literal transformation of the sculpture poses many questions for me, too.

Why do we admire uncontrollable, high-tech, carefully designed creations that transform human bodies and their behaviour? They challenge our perception and our ability to tell fiction from reality; to define our values. This installation forces me to articulate the role that I play as an artist. Why do I use this kind of horror to make a work of art? What is beauty? Why are global politics failing? Why do we take steps into a script in which humans are redesigned by the mistakes of other humans?

My role as an artist

My potential role as a human is to change something, to make observations about what I feel is relevant, and to leave a trace. On that basis, others may continue. I am who I am as a result of my upbringing, my genes or whatever in time and space, and I have something to offer. I feel special and I want to share it. I’d never dare to call myself an artist just because my Western education diploma says so. But I might become one soon.

The Master’s degree programme has had an amazing impact on me in terms of information and knowledge. It is an intense period in which I haven’t had a second to breathe. My thoughts are flying… Having the project as a test sample parallel to it is a perfect way to study. The programme helps me to understand my artistic fabrication and form my artistic statement. It gives me the balls to develop my personal socio-political artistic approach and to get directly involved in this highly complex project. I am a braver person. The programme provides me with safety and support. For the first time in my life, I have the time to focus on my investigative process. The huge speed in the planning and production of everything might just be the reason why there is so much bullshit to be watched. I always wanted to see what a work of art looks like if you devote more time to its development and production.”

The project is supported by the Dutch BKVB Fund.