Our alumni: how are they doing? Julia Kaiser and 'Soft Powers'

In 'Farewell to Han' I played the young woman Han, hanging around at her mother's place. This mother is a found, handmade frog of about 50 centimeter, who gets deeply annoyed by her daughter's immature behavior. In 'Soft Powers', Han considers the possibility of making a movie. Meanwhile, she sticks to her lethargic life. Her mother kicks her out of the house. Han is allowed to stay in the party shed behind the house. Drunk and smelly, she is unexpectedly visited by her history teacher, mister Schenkel, who looks for thrills to overcome his existential boredom.

Similar to 'Farewell to Han', in 'Soft Powers' I will combine live action and stop-motion animation techniques. I work with live humans and much smaller dolls for which I have stage sets built to fit their respective sizes. By choosing to work with analogue techniques without digital interventions, both worlds are obviously heterogeneous. Integrating them by accepting cinematic conventions will require a certain effort by the spectator: Verfremdung is imminent.

The dolls and humans are leveled through montage by using conventions of the classical continuity style. Besides that, I experiment with analogue, in-the-camera special effects like rear projection and the Schüfftan process to create the schizophrenic scale of the film's architecture.

Unlike 'Farewell to Han', 'Soft Powers' has a simple, but clear story as a starting point. Nevertheless, I use the working method I developed while studying at the Master to develop the script: a lot of experimentation and visual research which bring up solutions I could have never thought of." 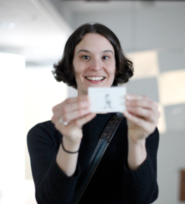