We talk to Pedro Collantes while he is in Japan for an acting workshop. In March 2013, as an Artist in Residence at the Swatch Art Peace Hotel (Shanghai, China), he will be preparing a short film that he intends to present at the Graduation Show 2013 in EYE.

“I want to find out what makes a movie powerful. I am less interested in fancy fiction films as a result of some creative outburst. I take real life and try to contrive it into a cinematic form. I get my inspiration from people and places I know. I try to condense it into a scene anyone can relate to. Very often, the form of such scenes is highly artificial. But that’s what touches me. It reaches me, because I can see life in it. That’s what motivates me. I am investigating the cross-fertilization of fiction and reality, or form and content, in many different ways. For '15 Summers Later', a short film, I wrote a detailed dialogue and I did of a lot of rehearsals and preparation with the actors. The film consists of one long shot at a beach. By choosing this location and by the absence of any editing, the scene looks like non-fiction in a way. In other projects, I have worked with these and many other parameters in order to find optimal combinations of fictional and non-fictional form and content. 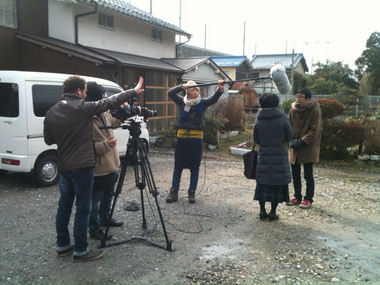 My second research theme is what I call the 1.5 generation of immigrants. These are the youngsters who are brought to a new country as early teenagers, as happened with huge amounts of young Chinese in Europe, especially during the nineties. They are not born in the country where their parents, the first generation, moved. They are in between the first and second generation of immigrants. In Spain, where I grew up, one of my closest friends came from China as a teenager. Some eighteen years later, he went back and I accompanied him. I was struck because he couldn’t genuinely connect to the modern China, whereas he couldn’t recognize the country from his childhood either: it had vanished in the past. I observed how his identity was an amalgam and how he sometimes seemed to construct his memories on the basis of nostalgic ideas.

This was the inspiration for a script I wrote during the first year of the master. The script proved to be a tool to find the moods, locations and the story for the film. The search isn’t over yet and I am open for what I’ll find in China. I try to connect my way of telling stories to this theme of an amalgam identity. I try to avoid the usual markers by which filmmakers tell their audience: ‘look, this is fiction’ or: ‘look, this isn’t’. When I show my audience real people, I want to provoke sensations they might have watching a character in a feature film.

In this way, my style represents the dislocation that’s so typical for modern culture. Since the beginning of the master my research themes haven’t changed, but I did improve my vision and my approach. Instead of choosing a more anthropological angle, I now concentrate on more intimate, personal stories and the best way to tell and show them: by contaminating fiction with everyday life.”