The performativity of squatting and the filmmaker as actor

“Coming from a background of location theatre, I’m interested in both the meaning of location or space and the meaning of acting. As Shakespeare said: ‘All the world’s a stage, and all the men and women merely players’. To play, or to act, is a way to position yourself in life and to get across what it is you want or will fight for. Doubting which role to adopt or changing one’s role is an on-going process.

Understanding squatting as a play
One example of such role play is my own situation. Until very recently I lived in the oldest squat of Amsterdam. I experienced my house often as a museum piece in the ‘Amsterdam experience’. In that sense I was forced in the role of an actress playing the character of a squatter on the pictures and holiday movies of tourists that were standing in front of my house while consuming the story of the Dutch squat movement.
In 'Exercise in idealism' I’m investigating the nature of squatting from the perspective of squatting as a play or a theatrical performance. The film documents the last weeks before the eviction of the squat and the way my fellow housemates and me took position in this game. For instance, we had to make a choice how far we would go in our resistance. Our house rejected the use of violence during eviction; other houses in the street, though, were making themselves ready for the fight with the riot police. How to negotiate one’s position among the other squats and what to communicate to the outside world? 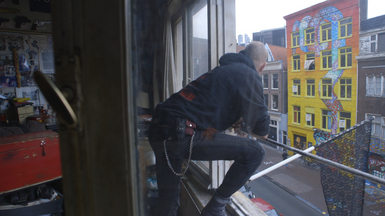 I’m contrasting these events to the way in the 1980s – the grand old days of the Amsterdam squatters’ movement – squatters, politicians and police interacted. Some of these examples I re-create to understand them better by investigating from within. For this I will organize re-enactments whereby the original ‘actors’ will advise and coach those who will re-enact those events. One such example is a famous event, filmed by Johan van der Keuken in 'The Way South': a squatter is giving a speech to a heavily armed military and police force, declaring that their massive eviction operation is pointless since the squatters left the building hours before through a secret hole to the church next door. 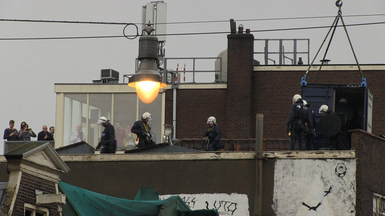 The filmmaker as actor
I’m using the notion of ‘acting’ or ‘play’ as an analytic tool to better understand the world. At the same time I’m using it as a formal tool as I’m taking up the role of the documentary filmmaker to investigate my personal situation and the dilemma’s that go with it. Exercise in idealism exposes and discusses the role of the filmmaker. ‘How can you make a film about a situation you’re completely involved in?’ ‘How will my film contribute to, or even form, the future image of squatters and the squatter’s movement?’ By explicitly sharing my choices and considerations with the spectator, I hope to tell a multi layered story, offering multiple perspectives.
The film also shows how the presence of a camera influences the way roles are acted out during evictions and what sense of theatricality this evokes. The police, the squatters, the TV-crews and photographers, they all use a set of fixed ingredients for their roles, for the way they act, the way they dress, the way they speak or the attributes they carry. And what happens when someone decides to divert from his expected role and shows up dressed as a ‘Sinterklaas’ during an eviction? 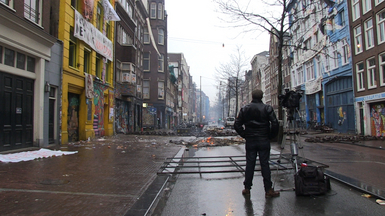 Idealism
Underlying the portrayal of the eviction of my squat and the confrontation with historic examples, is my desire to believe in something bigger than myself. This desire finds its roots in my Christian upbringing. I left behind the the texts, rituals and scripts of the Calvinist faith, but its inherent idealism has stayed with me. So core questions for me are: ‘how to give form to idealism in this day and age?’ and ‘how to deal with the tides of resistance and resignation of my Calvinist self?’"