“So far, my films don’t contain dialogue. My research question is: how can I use language as a cinematic element without overshadowing the image?  In order to investigate this question I have written three short texts, based on personal memories. Each of these texts is the basis for two or three different screenplays. In each of them, language plays a different role.

The first text is 'Greifensee'. What begins and ends like a plain and simple holiday trip on a Swiss mountain lake, actually is a straightforward drama between a mother and her young daughter. Their relationship is deeply changed. On the basis of this text, I have written three screenplays: one with very little dialogue, in which the emotions are under the surface and shown trough the image; one with a great deal of dialogue, in which all emotions are explicitly articulated; and one with a voice over, in which we hear what the main character thinks. I will shoot the first version for KORT! 2013. I want to work with characters and their development, and explore the ways in which I can tell a story by the performance of actors, including dialogue. However, the other two screenplays based upon the same text are very helpful in exploring the potential of the film. I get to know the characters very well from different point of views.

These investigations help me to develop the way I make decisions. Originally, I am a visual artist. I did objects, photography, poetry, installations, and video. In all my work, including my first feature length experimental fiction film 'Winter Silence' ('Winterstilte'), I tended to follow my intuition. I still don’t doubt the accuracy of these decisions, but I know that I need more reflection during my decision making process. By creating different versions and asking myself to judge alternative options, the reflective process gets the structures I need.

Dialogue is more than words and their meaning. Dialogue is an element in a choreography, just like music, sound design, cinematography, et cetera. When I create a sequence of images for a film with much dialogue, these images may differ decisively from a film with no dialogue or a film with a voice over. In the second text, I am not shy, a thirteen year-old girl is ordered to visit a protestant pastor. I am converting this text into various screenplays. One of them is character driven, another one is plot driven. In the character driven version, the girl walks to the pastor and the things she sees during this walk, differ substantially from what happens in the plot driven version. In the first version, her emotion largely influences the action. A third version will be a voice over. Unlike 'Greifensee', where the voice over consists of the character’s thoughts, the voice over in I am not shy is the monologue of the character looking back.

Similar to the first two texts, the third one doesn’t show a lot of events. And all the same, like in the other two texts, things drastically change. In 'What Time Is It?' two apparent opposites - a young, female sculptor and an aging merchant –indulge in the glamor and luxury of an expensive business trip. Imagining they are protected by a special bond of friendship, they create their own amorous universe. It seems to be a game without consequences, but that appears to be an illusion. The gray light of dawn reveals everything. A dream proved fragile. I submitted a synopsis in order to develop this project as a One Night Stand (a 50’ tv movie) together with Helena van der Meulen as co-author. Within a few weeks, we will hear if we are selected to write a treatment.

For my investigations, I selected one particular scene with minimal narrative, a kind of tableau vivant: the businessman is seated on his hotel bed in the giant suite. Like him, his assistant, seated in the armchair, is dressed in a suit. They have a last drink. He confesses her that she is his very best friend. I want to develop this scene in two screenplays, each from one of both perspectives.

Through my research I want to find out how I want to include dialogue and storytelling language into my films. During the Graduation Show, I will probably give a lecture about my research: about the choices I have been facing during the development of these three projects, and about my development in the ways I take decisions. I may present some photos and perhaps a scene from 'What Time Is It?' as well. Actually I don’t want to leave the Master’s Degree Programme. I love it here, especially since I work with screenwriter Helena van der Meulen as a coach.” 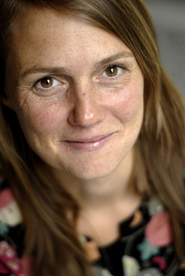