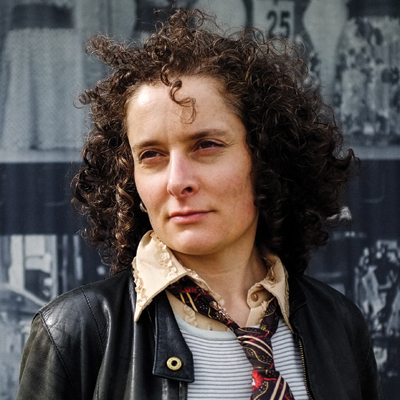 Channa Boon (the Netherlands, 1967) was trained as a painter but in the nineties she quickly developed herself as a multidisciplinary artist. She formed the band The Reincarnations with which she performed sound attacks in public space. Channa started making short films in 2004.

Read more
- 'Et In Arcadia Ego' by Channa Boon will be screened on 10 December 2015 at The Elephant in the Room?: Talks and Screenings on Social Inequality, Meritocracy and Art, organised by the The Royal College of Art and Open School East in London.
- 21 November 2015 in Venice: Jump into the unknown: Future Rhythms, including work by Channa Boon
- Channa Boon will be participating in the following shows:
- Artisterium VI 'Am I You?', Tbilisi Annual Contemporary Art Exhibition and Art Events from 4-14 October 2013 in Tbilisi, Georgia
- 'Angel among the ruins', group show curated by Ronit Eden, June 2014, Berlin, Neue Berliner Räume, incl. works by Aernout Mik, Cyprien Gaillard, Hala Elkoussy, e.o.
- 'TV has attacked us all our lives, now we fight back. Now we make our own TV - Nam June Paik', curated by Maria Gonchar, a two hour monolithic TV program broadcasting each Friday and Saturday on national TV in Odessa, Ukraine.

Artist's statement
I pry open reality to reveal a different reality behind it.

I passionately believe that our imagination is the true spark for the physical reality around us, while that reality is the inspiration for our imagination. So these inner images, as well as the collective images we all share, are in a continuous dialogue with the physical world around us.

I am searching for the moment when the communication between these inner and outer worlds stagnates or stops, causing tension, friction. In my view, that causes a delusion, collectively or individually. This may be subtle or grotesque, but it always has an impact.

My work operates at the various levels that occur within this mechanism, thereby touching both our individual and collective consciousness. The physical exponent in this phenomenon is the knowledge that the body, no matter where it is located on our planet, is a carrier of information. Managing information at ‘cell level’, a location functions in the same way. As we move around in this ‘field’ of information, our thinking moves and changes, too.

I am always looking for the core image of a cluster of ideas or images that performes a pivotal function in the work. You could describe this image as a ‘device’ or ‘tool’. The essense of this ‘apparatus’, is its physical quality; it has to do nothing other than simply be. This ‘body’ is the lense, that generates the reversal of the image; it embodies the perception and makes the translation possible.

Both of my films, ‘Sasha’ and ‘Et In Arcadia Ego’, are about perception. In Sasha, imagination plays the main role, healing the painter and bringing him back into a world that is renewed by his illness and catharsis. In ‘Et In Arcadia Ego’ the template within which the film takes place is the chess game played by two residents of Odessa.