Over the years, the projects of interdisciplinary artist Robin Coops became increasingly larger and conceptually more complex. At a certain point Robin Coops concluded that he had become a slave to his own concepts and ideas, and that he wanted to be free.

His research therefore focuses on creating circumstances that would open up a space for imagination, for himself, his collaborators and his audience. By doing so he aims at being less self-conscious in his work process, rediscovering a more intuitive response and becoming a performative director: one who thinks through making.

Robin Coops uses jazz as a metaphor and guideline for the experimentation and exploration in his research. Jazz is based on the concept of improvisation and at the same time makes use of a strict set of rules. This metaphor helped Robin Coops to structure his working process and experimentation. ‘Jazzing frames’ thus means to create space for improvisation within the frame and perhaps eventually to reframe our position.

As part of his research Robin set out to create a surrealistic horror film TOUCH, about the fear of losing control, and the desire to lose control. In the film, a photographer becomes his own subject after he meets a mysterious figure. He is seduced by this animal-like creature, and as his desire to get closer grows, so does his fear. The music and movement in the film guide us into a nightmare in which the character slowly loses control over his own body. The film poses the question, ‘Where does my skin ends and yours begin?’ How can one preserve one’s autonomy in the presence of the other?

TOUCH functions as the frame within which Robin Coops has conducted various experiments related to his research. Every stage of the filmmaking process has been recorded in the form of a diary series, accompanied by pictures and videos. 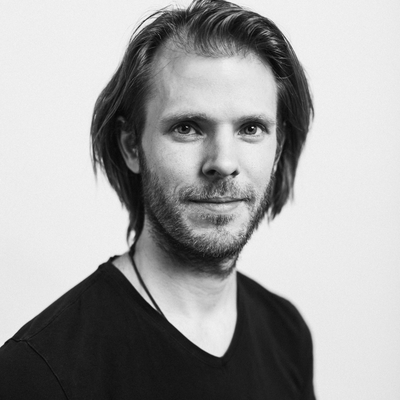 Robin Coops is a multi-disciplinary artist based in the Netherlands. He studied directing at the institute of performative arts in Maastricht and finished his Master’s at the Royal Conservatory of Music in The Hague, in close collaboration with the composition department.

Interested in the tension between control and losing control, he explores how we are guided by, or able to manipulate political, technological and social systems and how we can move freely in the given circumstances. In his work he uses technology to research the tension between the analogue body and the digital machine. Genres like horror and tech-noir are used as a device to emphasize these themes.

In his work he puts different disciplines into a dialogue to create a single unified composition. The results are films, performative installations and audio-visual concerts.