Mira Adoumier’s research centres around the notion of exile and in particular: how to convey through cinematic means the experience of the exilic position, the experience of alienation, of being in the liminality and the subjective experience of the specific relation of space-time that stems out of this external/peripheral position. There is a multiplicity, a multilayered potential encapsulated in that idea of periphery. What interests Mira is the relation of centre, as a place of power and dominance, to the periphery or, rather: peripheries; how they inform each other. In her research she combines the notion of ‘periphery’ to that of ‘decentred’, and explores the periphery as a decentred landscape, a landscape from which one can look onto the centre more clearly than one could do the other way around. She worked on it in two projects, two landscapes: the forest and the night.

Dreams of a Wandering Octopus is a three channel video installation set in a remote millennial cedar forest, at the edge of the mountains in Lebanon. Adoumier's project started with her looking for an operative image, a sort of image that could be a cognitive metaphor for an exilic liminal space, a sort of encapsulation of time and space. She thought that the cedar tree, with its symbolism as the national symbol of Lebanon, while being at the periphery of the society, millennial yet in danger of disappearing due to the ecological crisis there, was the perfect subject. But then the project turned into an impressionist work, where the forest, at the a background emerges as a foreground. She wanted to offer a space for the audience a moment of reflection and meditation in the presence of these trees.

The Night Came About is a feature film set to be in production by the end of 2022. The idea is to depict a landscape in which the post war youth evolved as well as the one defeated by the war. Adoumier decided to treat the night as a geographical landscape, a sort of negative, an inversion of the day. The night becomes a parallel space where possibilities can emerge. That particular night, which starts at the beginning of the film, is a night that will never end, effectively taking over the “day” and all that it represents. 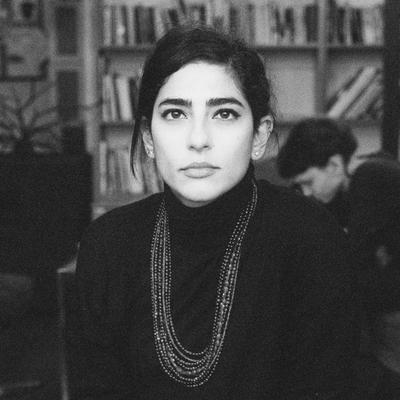 Mira Adoumier (1985, New York) is an author/independent filmmaker based in Beirut and Amsterdam. With an initial background in Psychology, Philosophy and Biology, she later on completed a degree in Film Production at the Mel Hoppenheim School of Cinema (Concordia University, Montreal). Through her fictional, essayistic works and video installations with landscapes, she explores the relationship between peripheries and centers, opening spaces and strata of possible and alternate realities. Her first feature, Errans, premiered at CPH:DOX 2020 in the next:wave competition.