Bart Juttmann (1981) graduated as a scriptwriter from the Film Academy in 2005. He wrote the scripts for ‘The Seven of Daran’ and ‘De Ein Fan ‘E Wrald’ and directed the short film ‘Thuisfront’. He commenced the Master of Film programme in 2009. Why?

"What I actually want to learn is screenwriting. To me, this implies writing lucid scripts. I have no interest in dictating whole series of details about cutting, light or diction, but want to inspire the cast and crew to perform at their absolute best. I endeavour to produce an exact, carefully considered text which renders the whole intention of a shot tangible.

I am currently studying the way that others interpret the symbols in my scripts. Once I have figured that out, I should also be able to write more clearly, while avoiding much of the misunderstanding that might otherwise arise. For instance, because an actor inadvertently chooses a tone that is at odds with the intention of a scene. Or because the cameraman’s choice of frame or prop master’s chosen model of telephone disrupt that same intention.

I need to listen very carefully, and continue to do so in order to avoid such misunderstandings. By considering the effects of symbols together with cast and crew I aim to arrive at a more cinematic way of scriptwriting. I also practice this by directing: I am due to shoot a short film based on a script of my own in April. I shall methodically take notes during the preproduction, shooting and postproduction of the interpretations and associations that I hear from the cast, crew, lecturers and others.

I have noticed that my work often involves the contradiction of instinct and intellect, primitiveness and refinement. Played out against a background that is usually political or social, my scripts and films often argue in favour of the merits of dialogue. The best way to tackle problems in my opinion, is to listen to one another and exchange ideas. I also incorporate this attitude in my own working methods. By communicating openly and continuing to reflect, I am learning how to write better and in a more cinematic manner.

Apart from the short film script, I am also currently writing my dissertation, in which I study the process of how certain symbols in a film suggest something of greater significance. I am keen to develop my own sense of semiotics by discovering how an audience responds to the symbols I use myself.

My ideal is to make films without any misunderstanding. These two years are a marvellous opportunity to fathom the depths of my own, highly personal challenge. I have been offered all the scope, coaching and expertise I require to get the very best out of myself. This is not only a huge relief, but primarily a step which I view as essential to my own development." 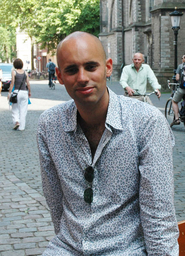