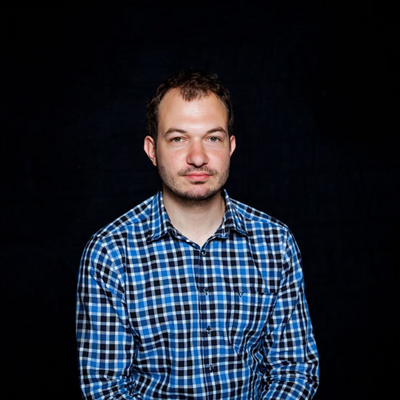 Momchil Alexiev (Bulgaria, 1984) is a Bulgarian artist and filmmaker. Born in Sofia, he has spent his childhood between Moscow and his home town. After finishing high school at the Montessori Italian Lyceum of Sofia, he moved to Rome in 2003 to get his Bachelor’s Degree at La Sapienza University.

He works on short films and documentaries and collaborates as a video scenographer with theatre companies in Italy, Bulgaria and The Netherlands. He develops interactive installations and is a co-founder of the research centre Aesop Studio and a production company called Growing Videos.

In his work in video scenography and installations, he often combines theatre and video in the form of layers. The fascination with this process evolves into a search for new converging points. He believes that new visual mediums offer an answer. As part of the Netherlands Film Academy Master's Program he brings his search further. After working within film, performance and installations his graduation project is set to be a 360 degree film. His focus is on expanding the notions of cinematic space and immersive film. Writer of stories and poems with humorous and absurd touch, his inspiration lies in revealing unsuspected corners of reality and search for the boundaries of its layers.

Artist's statement
...Left, Right, Left, Right... I am sitting alone on this remote island, closing and opening one eye after the other while trying to concentrate on the horizon. It is an ancient practice which pirates have mastered during their early travels across the Indian Ocean. The purpose of this technique their teacher had put like this: “to train the eye in a manner that enables it to see behind itself”. Funny, it reminds me of the opening lines of Johan van der Keuken’s film Face Value. Only that in his case he refers to the video camera.

...Left, Right... Pirates never really understood the precise meaning of the teacher’s words. For some of them it was about trying to see the way they used to. For me it is about learning over and over again. I see it as an invitation. A stimulus to “let go” and to forget everything I know. I claim it is, on the one hand, about regaining the ability to question everything I see, and on the other hand a way to come up with a different perspective. Strangely enough it makes me think of immersive cinema.

...Left, Right, Left... Flint used to lead these visual exercises but after he disappeared, the parrot of Long John Silver, who had memorized many of the captain’s phrases, was repeating it all the time. It was as if we had a new “ignorant master”.

...Left... I liked that. It made me think that such a master doesn’t force knowledge but rather helps you to find your path, your own way to it. What if this is applied in film?

...Right... If a film technique questions our very own cognition that would be a way to go.

...Left, Right, Left... A different use of the eye means a new condition of spectatorship and a profoundly different way to communicate and discuss knowledge. But every communication starts with an agreement and agreement is based on trust.

...Follow me and I will lead you to victory!... one of the parrot’s favorite quotes from Flint.

The old Captain used to say also one other thing: ...Trust is like a building and a building is as strong as its foundations...

Thank you, Flint and thank you ignorant master. But what are the foundations? While asking this, both my eyes are open and focus on an approaching cruise ship that just appeared as a dot on the horizon. I wonder if the people on it will be interested in my interpretation of this old exercise.