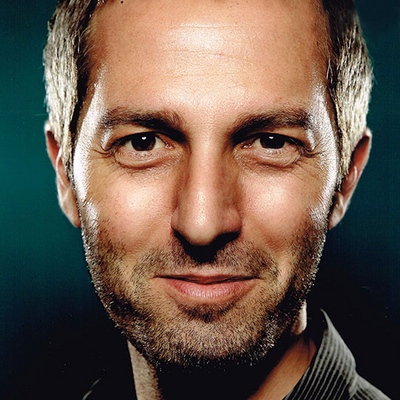 Starting his career as a writer and visual artist, Jack Faber (Israel, 1978) worked as a culture and film critic, published two novels and exhibited in group and solo exhibitions, before becoming a full time film maker. While writing and directing his own projects, mostly shorts and documentaries, he’s also an experienced editor and passionate cinematographer. Currently he is working on his first fiction feature film A A, developed during his studies at the Master’s programme.

Artist's statement: Sub/Versions(s)
Exploring the definition of film making, my work questions whether we can even perceive power without participating in its appropriation.

I constantly investigate the possibilities of reverse-engineering the cinematic commodity into something different, something new. Working with scripted materials and salvaged footage, CCTV material, archival hacking or drone recordings - to name a few concrete examples from recent projects - I aim to create cinematic experiences which are emancipated from industry ideologies of market hierarchy and high budget dependency.

Film making has not only the right, but also the task to engage itself with the most secret of our thoughts, our deepest hidden emotions. That's not its privilege, but rather its function: to enable us to negotiate and find explicit ways to project and manifest them. Any false authority will have its own methods to appropriate, censor and (ab)use it, wishing to harvest the latent potential that lays under our story-telling. My cinematic practice questions those methods - showing the field of filmmaking as an area of constant conflict between the industry and its dissents, and exposing the industry’s inherent deflection mechanisms hiding its covert ideologies. The drama that takes place on the screen is deeply connected to the drama taking place behind it in the manufacturing technologies of moving images and the political practices of their distribution. Revealing this artificial segregation between the processed product and the productive process is very much the core of my work.

Being a filmmaker first, I wish to create stories for the screen which not only examine these urgent issues theoretically, but also enable strong emotional engagement. To experience, within the film, the conditions of its making and by that to allow open negotiation between the work and its viewers, who then take up the position of participants.