a (scam) research on digital spectrums

Scanning means either looking carefully at something in detail or overlooking something quickly to get the general idea. It is linking two different speeds and degrees of attention in one act. It is also defined as looking through something to take an image of an inside.

Although, even if we might be able to fold and unfold space digitally by mapping the world, we cannot render its insides, its guts. Only the skin of it. Even in medical images, what we see is an ethereal extrapolation of data, not the insides as they are if we were to cut open the body.

With the rapid democratisation of 3D visualization and representation tools we start to integrate this new photographic style in our contemporary aesthetic and make new use of it.

Lidar, the acronym for ‘Light detection and ranging’, is a laser-based method that extracts data (ranges) by measuring the time for the reflected light to return to the receiver. It is mapping the heights, the up and downs of an object based on its coordinates. It is a time-space method that allows the passage from the solid state into its fluid, digital state.

This mutation leaves behind traces and impurities. In this process of digital revelation something has been caught. It is as if by undergoing this transformation from one state of matter to another, back and forth, a new kind of materiality has been secreted. Meshing, that is to say unfolding the network of textured data collected and extrapolated, creates a digital matter that has the double intensity of a mesh and fluid. In the manner of an undercurrent that forms its shape and flow but is elusive by nature.

This transformation is almost an alchemical process that takes advantage of the in-betweenness of the medium to reveal errors and glitches. And instead of smoothing and erasing them, I decided to look at those anomalies and even highlight them. 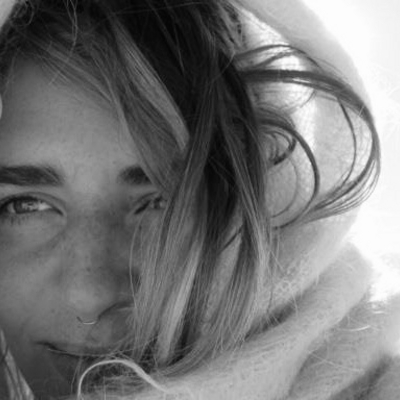 Sarah Fernandez, also called SEVC, is not a digital native, she was born in the early 90’. In a time just before the spread of digital culture that fascinates her today. She graduated in Philosophy and Social Sciences at the University Pantheon-Sorbonne where she took a special interest in questioning the logic and reality of our so-called ‘best of all possible worlds’.

Her areas of interest circulate around virtual realities and speculative philosophy with an affinity for hybridization and anarchism. She took her obsessions in the visual realms and pursued her research through Art when she joined the postgraduate program in the Universidad Nacional de las Artes in Buenos Aires. There she produced several animations that already used a mix of different film formats and techniques.

Since 2019, Sevc is investigating new digital ecologies. Through her practice of scanning and 3d modeling she is fictionalizing our shared world to displace them in the virtual realms where new truths can be unveiled.

The raw, imperfect and seemingly incomplete outcomes of her experiments offer an experience of estrangement to the viewer by exposing and demystifying current technologies like 3D scanning and VR. Her latest piece focuses on the scanning of a female body and the portrayal of her hometown wetlands of Camargue.